EAST LANSING — Mark Dantonio breaks into a sly smile when he talks about his offense.

Rather, when he avoids talking about it.

Has there ever been such a closely guarded game plan as the offseason changes Michigan State has made to its offense, he was asked Tuesday?

“I'm sure there's been one. I don't know,” Dantonio said, getting a twinkle in his eye as he started to grin. “I guess 'Little Giants,' ” referring to the fake field goal play that beat Notre Dame in 2010.

And while Dantonio wants more from his special teams units, he would prefer to get touchdowns and yards the traditional way from his offense, rather than rely ontrick plays.

A dearth of insight into exactly how the Spartans might look differently on offense remains the prevailing theme for Dantonio this week. And keeping the secrets of the changes has provided an ongoing chuckle for the Spartans as they prepare to host Tulsa to open the season Friday night (7 p.m./FS1). And it comes from the players on an edict from above. 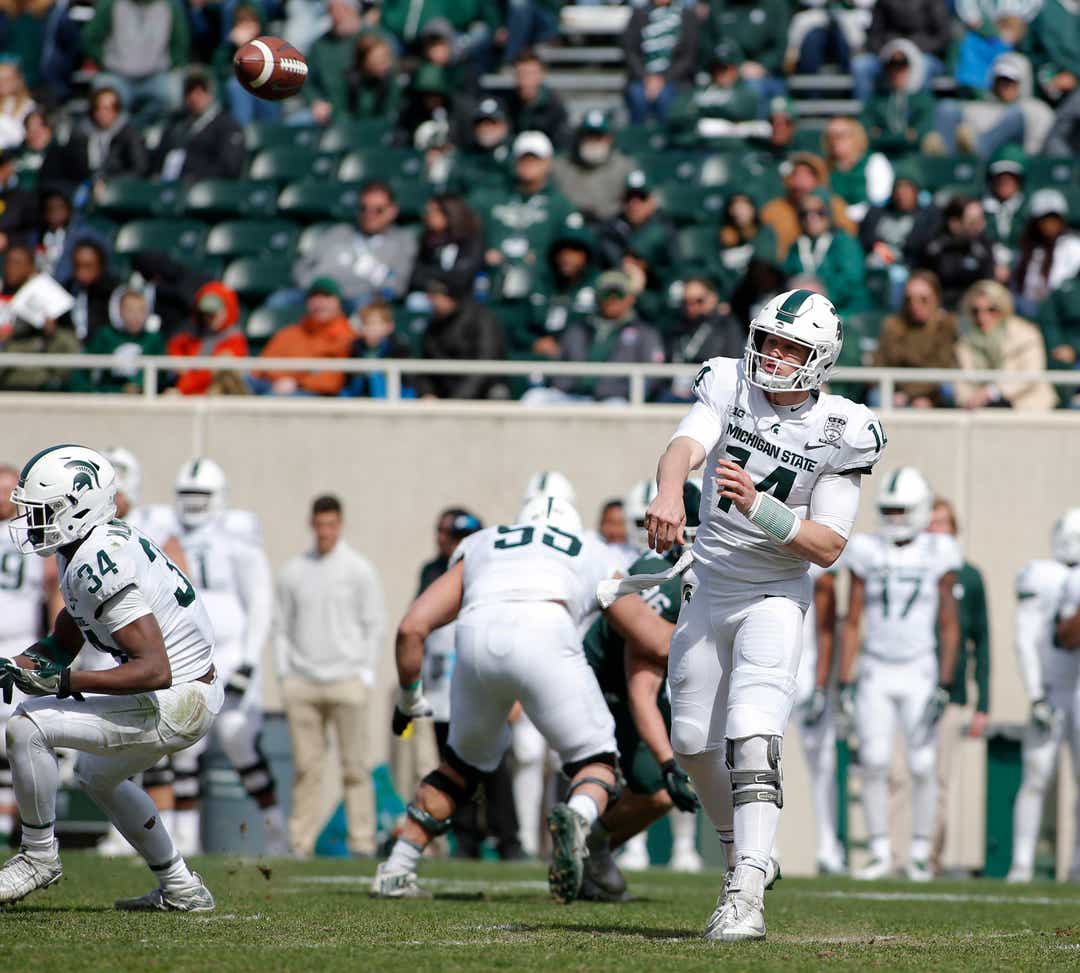 Enough time has passed that last year's offensive frustration has turned to joking from the players. At media day earlier the month, Heyward subtly trolled the MSU fanbase by jokingly predicting the Spartans’ first play this season: “We’re running a jet sweep to the wide side.”

The 2018 offense was equal parts comdey and tragedy, particularly over the final half of the regular season and in the Redbox Bowl against Oregon.

Heyward, who led MSU with 529 rushing yards and five TDs on the ground last season, said the players all have seen and heard criticisms via Twitter and other online sites.

“At times last year, we were just like, ‘Oh my gosh.’ You couldn’t even go on social media without seeing stuff about our offense,” he said. “But hopefully after this year, we don’t have to see those things. Positive things. Negative? Ugh. At times, you just want to be like, 'enough is enough.' But it’s comedy. Now it’s comedy. It wasn’t previously, but you gotta just go out there and execute.”

Quarterback Brian Lewerke, whose shoulder injury was among a number of injuries that affected those totals, has turned the page. He believes the Spartans have “a clean slate” with Tulsa up first.

And he is making MSU’s mission much clearer than its machinations.

“Just being able to score points is our main thing,” said Lewerke, who missed three games and endured a miserable 5-of-25 passing performance against Michigan with the arm injury. “Whatever we do, it doesn’t matter what kind of offensive scheme we run as long as we score points. That’s what our main objective is, and that’s what we gotta do.”

However, Lewerke made it clear that a secondary goal, at least for now, is to obscure the upcoming changes.

That was in January, shortly after the Spartans’ 7-6 loss to Oregon in the Redbox Bowl. Dantonio has said he felt shuffling coaches without firing any or bringing in new blood helped his team focus on improving immediately, rather than having to wait for outside hires. It allowed MSU to get back to work quickly when winter workouts commenced.

“It’s really not anything new to us, but it’ll be something new for y’all in a way,” Heyward said of the offensive changes. “I don’t know, I can’t really say what we’re doing because obviously coach D hasn’t said anything about it. But we’re excited about this, and you guys will be able to see the changes hopefully.”

Not many of the structural differences were revealed publicly in April's Green and White scrimmage. Even less has been unveiled to the media in three 20-minute glimpses of the start of practices. And those making the changes wanted it that way.

“We've been productive in camp offensively. We need to be productive in games,” Dantonio said. “I don't think there's any big secret there. … I think everyone wants to try to keep everything a little bit behind the curtain so people don't prepare for you. Everything is about practicing for your opponent, trying to simulate what they do. That's usually the way things work both sides of the ball and special teams. History is the best indicator of the future, things of that nature. You want to try and guard against those type of things, especially when you made a couple changes.”

Dantonio added that MSU plans to “be who we are” on offense, another intentionally nebulous statement. So Lewerke fielded an equally nebulous question: Which is more energizing right now, the structural changes or the attitude alteration?

WWE Champ Drew McIntyre Thanks Dwayne 'The Rock' Johnson For Seeing His Potential, You Believed! - TMZ

Coronavirus Is Making a Lot of People Anxious and Depressed. But Some Sufferers Actually Feel Better Now. - The Daily Beast

Andrés Iniesta Plots a Return to Barcelona, Where the Beauty Is Gone - The New York Times

South Dakota's governor resisted stay-at-home orders. Now it has one of the nation's largest coronavirus hot spots. - The Philadelphia Inquirer

In Never Have I Ever, the Real Love Story Is Between a Mother and Daughter - Vulture

Realme Narzo 10 and Narzo 10A go official in India at last - Gizchina.com

Could former Badgers star Quintez Cephus be among the answers to Packers’ questions at receiver? - Madison.com