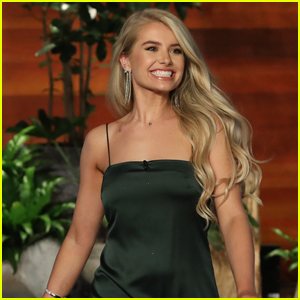 Demi Burnett is opening up to Ellen DeGeneres.

The 23-year-old Bachelor in Paradise star stopped by the talk show where she opened up about being in the first same-sex relationship in Bachelor franchise history.

If you missed it, during the finale Demi proposed to Kristian Haggerty.

During her interview, Demi opened up about the fear she felt about coming out on TV.

“It was a lot of fear. Fear of judgment, it was fear of disappointing people in my life, making them uncomfortable,” Demi shared. “It was just really hard, and really scary. But it all worked out.”

Also during her interview, Ellen surprised Demi and Kristian with matching Ellen-ized bikinis and an early honeymoon to the Sheraton Bali Kuta Resort!

Doug Sanders, ‘Peacock of the Fairways,’ Dies at 86 - The New York Times

Too Hot to Handle: Why Rhonda Hasn't Seen Sharron In a Year (Exclusive) - Entertainment Tonight

Help Kimmy Schmidt save the day in her fun, interactive Netflix special - The A.V. Club

They Watch Trump’s Virus Briefings Daily. Here’s What They Have to Say. - The New York Times

Scammers are hoping to cash in on your coronavirus stimulus check - WFAA.com

Could former Badgers star Quintez Cephus be among the answers to Packers’ questions at receiver? - Madison.com

"I Know This Much Is True" offers twice the Mark Ruffalo, many more times the sadness - Salon